Purpose: The purpose of the Francis Crowe Society is to recognize UMaine engineering graduates as they accomplish the formidable goal of completing their engineering degrees and to recognize others who have made considerable engineering contributions and honored the profession. 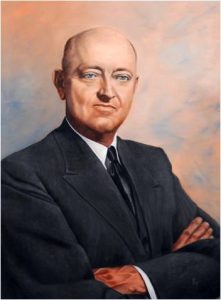 Who is Francis Crowe?
Francis Trenholm Crowe (October 12, 1882 – February 26, 1946) was the chief engineer of the Hoover Dam. During that time, he was the superintendent of Six Companies, the construction company that oversaw the construction project.

Born in Trenholmville, Quebec, Crowe attended the University of Maine where he graduated in 1905 with a degree in civil engineering. The University’s Francis Crowe Society is named in his honor. Crowe became interested in the American west during a lecture from Frank Weymouth, an 1896 graduate of UMaine civil engineering, who was a guest speaker from the United States Bureau of Reclamation. Crowe signed up for a summer job before the end of the lecture. That summer job began a 20-year career with the reclamation service that would change the face of the American west. In 1924, Frank Crowe left the United States Bureau of Reclamation to join the construction firm of Morrison-Knudsen in Boise, Idaho. Morrison-Knudsen had recently signed a partnership with the larger Utah Construction Company to build dams.

While working on the Arrowrock Dam in Idaho, Crowe pioneered two practices that are crucial to the construction of large dams. The first was a pneumatic delivery system to transport concrete and the second was a system of overhead cables to allow the pneumatic concrete to be pumped at any point on the construction site. With this technique, Crowe built some of the largest dams in the American west, including the Hoover Dam; Parker Dam 155 miles  downstream from Hoover; Copper Basin and Gene Wash Dams on the Colorado Aqueduct system; and Shasta Dam in Northern California.

Photos from the College of Engineering Francis Crowe Ceremony, held at the Collins Center for the Arts on Saturday, May 12, 2018.

Who can become a member?
Graduate Members
Each new graduate is invited to become a member; there is no other requirement for membership other than successfully completing an engineering degree program. Since 2000, graduates who attend the ceremony are recognized with a medallion and a membership certificate in the Society. The society is dedicated to each graduating class of engineers in anticipation of the future contributions they will make to society while practicing their profession and to the families of these new engineers who have supported their sons, daughters, spouses, partners, and friends towards the achievement of their academic goals.

Hall of Fame Members
Recognition and membership as Hall of Fame Engineers in the Francis Crowe Society is granted to persons for their extraordinary contributions and accomplishments in their profession or to society.  Preference is given to graduates from one of our engineering programs who have maintained a significant connection to the College of Engineering and the University of Maine.   Except in extraordinary circumstances, no more than two individuals will be inducted annually at the Hall of Fame level.

Inductees will be selected by the College of Engineering Awards Committee.  Nominations will be made by faculty in department-wide meetings.  Departments will accept suggestions of individuals for consideration from any source.Induction as a Hall of Fame Engineer will occur at the College’s annual award banquet or other suitable venue.

Honorary Members
Honorary members are chosen by the College to honor them for their non-engineering contributions to the College community. Faculty, officers, and staff in other cooperating departments within the College of Engineering who are not engineers are inducted as Honorary Engineers.

Industry Members
Industry Member Inductees are engineers chosen by the College to recognize them for their contributions to engineering.

High School Teacher Members
High school teachers are nominated by their former students based on the positive impacts they have had on the lives of current engineering students and those who have already graduated.

Distinguished Members
Each year each engineering department may nominate an individual who has made major contributions to advancing the art, science or practice of engineering.

Regular Members
Officers and staff who are engineers are inducted into the Francis Crowe Society for their engineering contributions to the College community.