Exterior view of the building from long road.

Entrance of the new building.

Exterior of th ebuilding was designed to match the brick style of buildings on campus.

“The Ferland Engineering Education and Design Center will provide students with the opportunity for hands-on learning in the best space of it’s kind in the northeast. Dana N. Humphrey Ph.D., P.E. Dean, College of Engineering 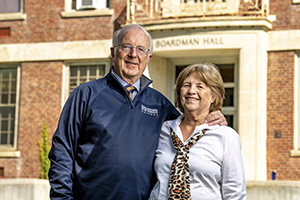 Jim Ferland received a bachelor’s degree in mechanical engineering at UMaine in 1964 and began his career as an engineer with the Hartford Electric Light Company, a subsidiary of Northeast Utilities in Connecticut. In 1967 he joined the initial operating staff of the Millstone Nuclear Power Station and in 1976 became station superintendent, the same year he achieved an MBA from the University of New Haven. He completed the Harvard Graduate School of Business Administration’s Program for Management Development in 1977 and shortly thereafter was named executive vice president and chief financial officer of Northeast Utilities. He became NU’s president in 1983.

In 1986, Jim Ferland was recruited by Public Service Enterprise Group (NYSE:PEG) as chairman, president and CEO, positions he held through retirement in 2007 — making him the longest-serving CEO in the industry. Jim and Eileen split their time between homes in Florida and Maine and enjoy boating and traveling with their son, daughter, and four grandchildren.